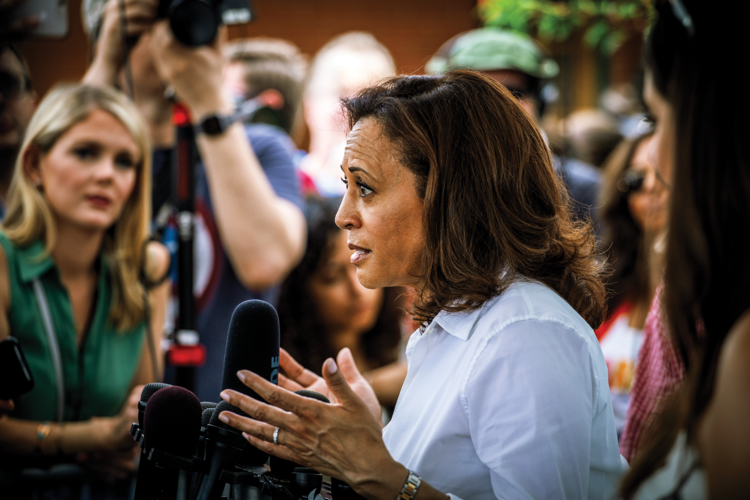 Vice President-elect Kamala Harris embodies many firsts for America: first female, Black and South Asian vice president. After she dropped out of the presidential race Dec. 3, 2019, President-elect Joe Biden chose her Aug. 11 of this year as his running mate. This was a surprise to me, given their disagreement on busing and segregation at the Democratic debate on June 27, 2019.

Representing the state of California, Harris was also the second Black woman to serve in the U.S. Senate. Although Harris can be described as a pragmatic moderate, having a woman of both Indian and Jamaican descent in a position adjacent to the highest power in the country is, frankly, unbelievable.

Like Harris, I am a child of immigrants. Indian immigrants, at that. And let me assure you, Harris and I are just as much American as, say, John Eastman – a Chapman University law professor who questioned Harris’ citizenship eligibility for vice presidency.

It is unbelievable, in the sense that I am struggling to wrap my head around how we went from President Donald Trump and Vice President Mike Pence to Biden and Harris. Four years ago, as a senior in high school, I had the same confusion as to how we went from former President Barack Obama to Trump. I remember crying the day after Election Day 2016 with my classmates in our world history class as we sat there in silence. One kid sitting smugly at the front of the class wore a “Make America Great Again” hat. Deep down, I knew it was going to be a long four years.

In the 2016 election, I was 17 – one year shy of being able to vote. If someone told me at 17 that Biden would be in office again and that his vice president would be a Black and Indian woman I didn’t even know existed at the time, I wouldn’t have believed them. This is what makes it so hard for me to grasp – how the pendulum swung so vehemently in the opposite direction.

As the daughter of two college professors, the 56-year-old Harris went on to attend the historically Black Howard University and pledge to Alpha Kappa Alpha, the first historically Black sorority. Her mixed identity offers representation to thousands of American women who are too often marginalized and endangered on the basis of race.

Harris is not perfect; her career shows that although she was California’s attorney general from 2011 to 2017, she avoided intervening in cases involving police force. Jamilah King, a Mother Jones reporter who has covered Harris’ political career, told NPR that Harris was echoing the “tough on crime” rhetoric that was popularized during the 1980s and ‘90s. As King mentions in her reporting, it is hard to pinpoint Harris’ views. It took her a while to come around to marijuana legalization, arguably worsening the prison industrial complex for non-violent drug offenses.

Yet, despite some personal disagreements on her complex prosecutorial record, I am here to say that having a biracial woman as the second commander-in-chief is really, really exciting, because Harris has also done some good.

She co-sponsored a bill that outlawed the gay panic defense. After George Floyd’s death, she co-introduced police reform legislation. The criminal justice and prison systems are complex beasts that have been decades in the making, and it is virtually impossible for one person to abolish it entirely.

At a speech Nov. 7 in Wilmington, Delaware, Harris thanked the American people for ushering the United States into a new day. And that’s all we can hope for – the ability to close this appalling chapter and move forward into a better tomorrow.