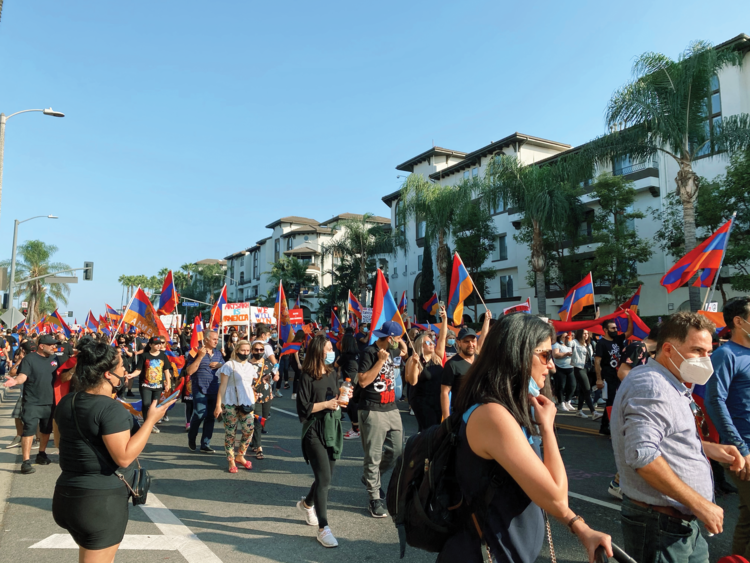 Territory in the Caucasus mountains in Armenia, referred to as Nagorno-Karabakh, has been the topic of geo-political conflict for decades. Senior broadcast journalism major Lindsey Arabian is all too familiar with the war-torn state that Nagorno-Karabakh – or as Armenians call it, “Artsakh” – has become.

“It’s heartbreaking to see their posts on social media and word of mouth is going around that people are dying left and right,” Arabian said.

Originally, when Armenia and Azerbaijan gained their independence from the Soviet Union in 1991, the two went to war in the Nagorno-Karabakh region after tensions between the two nations bubbled over. The conflict ended in 1994, but the global pandemic provided an opportunity for Azerbaijan to target the Armenian ethnic enclave in Nagorno-Karabakh. Chapman political science professor Nubar Hovsepian described the war as a frozen conflict that has become unfrozen.

“Right now the Azeris want to take over the whole area,” Hovsepian said. “We are at a standstill. We pay the price of history, of larger empires breaking up and in their wake, different national issues arise over territory.”

Because the country has a small population of 3 million, every eligible male must serve in the military for two years. Some of Arabian’s family in Armenia were enlisted to serve.

“I have one uncle who’s a major in the army and then I have another uncle who served his two years, but the government has him on call in case they need to call him to the front lines,” Arabian said. “I have friends whose family members have gone and been called to the front lines.”

Alliances in the war – Turkey backing Azerbaijan’s assault on Nagorno-Karabakh and Iran trying to remain a mediator – add a new twist to past conflicts.

“You have the former Soviet Republic, you have Turkey stepping up trying to revive Turkish dominance to recreate the Ottoman experience by expanding,” Hovsepian said. “Turkey has heavily armed the Azerbaijanis with fairly recent drones that are hurting a lot of the Armenians.”

There’s a large Armenian American population in Southern California, specifically in Pasadena, Glendale and parts of West Hollywood. Those residents are showing support for Armenia by organizing protests, like the Oct. 23 march from an Armenian church in Montebello to the nearby Armenian Genocide Martyrs Monument.

“The whole Armenian community is coming together and we’re creating these giant care packages,” Arabian said. “My friend organized a protest at Los Angeles City Hall and there were over 100,000 people in downtown Los Angeles two Sundays ago.”

While the foreign ministers of Azerbaijan and Armenia met with U.S. Secretary of State Mike Pompeo, both Arabian and Hovsepian said the situation doesn’t appear to improve for Armenians, regardless of any American intervention.

“The war is not going well. The level of casualties is high,” Hovsepian said. “The question is: do Armenians have rights to Nagorno-Karabakh or does Azeri nationalism require ethnic cleansing, getting rid of all the Armenians? … This is what’s called settler colonialism.”

Arabian said that Chapman students can aid the conflict in Nagorno-Karabakh by educating themselves and raising awareness. The best place to donate to avoid fraudulent Azeri sites is the Armenia Fund.

“Go to protests if you can. Show your support and start a conversation – it means a lot,” Arabian said. “Telling as many people as you can is the best thing we can do here.”