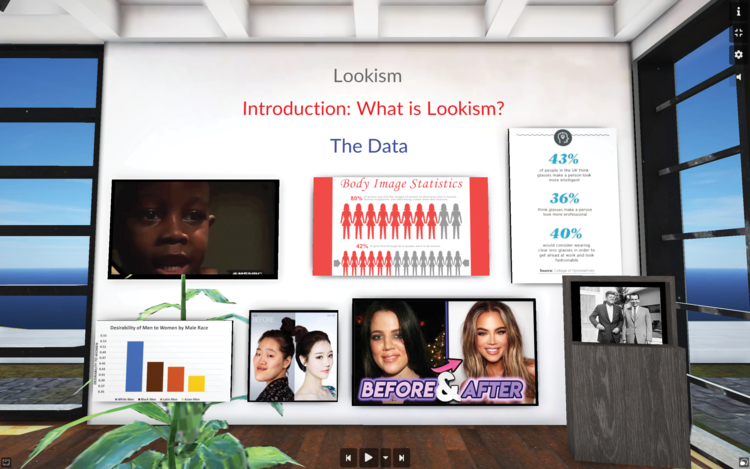 Each year, Chapman’s Residence Life and First Year Experience presents the “Tunnel of Oppression” gallery. Under normal circumstances, Residence Life dedicates the Sandhu Conference Center to the exhibit, where students can walk around and view performance art pieces on a variety of issues related to the BIPOC, LGBTQIA+ and disabled communities. Given the pandemic, organizers of the installation had to adapt this fall to an online environment and create a virtual museum.

Attendees of the exhibit, which was active Nov. 9 through Nov. 12, were able to click through a guided tour, which depicted a three-dimensional animated museum that overlooked an ocean. The museum had several white walls with installations on specific topics. For instance, the colonialism installation depicted art pieces from the colonization of indigenous communities in North America and Central America, while the colorism exhibit depicted how different individuals are treated on the basis of their complexion.

Attendees then had the option to join a small group discussion with a facilitator from Residence Life. One of those facilitators was Christy Martinez-Saucedo, the resident director of Pralle-Sodaro Hall.

“The ‘Tunnel of Oppression’ comes from a lot of societal topics that people tend to talk about and want to either learn more about or want to discuss further,” Martinez-Saucedo told The Panther. “We truly do value diversity, equity and inclusion; this is one way that we demonstrate it.”

Martinez-Saucedo said her role was to help students process and discuss the content of the gallery.

“We’re really just here to listen and to support,” she said. “We understand that these topics might be activating for some, so essentially, that’s what we’re here for: to provide that avenue if people wanted to provide feedback or knowledge that they had so we can cater that to next year.”

Noora Roushdy, a freshman psychology major, was one of the attendees of the small group discussion. She was pleasantly surprised by the content of the exhibit.

“I didn’t know what to expect when I found the link,” Roushdy said. “I love that it’s interactive and I got to choose what I wanted to learn more about. I liked that I could take my time.”

“I don’t think I’ve ever heard that term being used, but the meaning behind it is really well-known,” Roushdy said. “There’s a lot of bias and prejudice. People think that straight people are ‘better’ for absolutely no reason, which is ridiculous.”

Ponthea Zahraii, also a freshman psychology major, mentioned the topics covered by her coursework mirrored many of those addressed by the “Tunnel of Oppression.”

“I’m taking a cultural anthropology class right now and we actually learned that race is a social concept that people made in order to justify enslaving other races,” Zahraii said. “There’s nothing different between different races.”

Zahraii also observed that many of the “-isms” from the exhibit’s titles were prevalent in comedy.

“When I was going through the virtual museum, I noticed that all of these things are ingrained in our pop culture,” she said. “People make jokes out of these things: racist jokes, sexist jokes, homophobic jokes. It’s weird to me that people are amused by other people’s pain, suffering and history.”

Saucedo emphasized the importance of the virtual museum’s invitation to self-educate. That aspect is something she’s trying to bring to others within her own home.

“I can’t control what (my family does), but I can control giving them that knowledge,” she said. “I like to think of it as instead of calling them out, I’m calling them in and saying, ‘This is why this is something you shouldn’t do.’”