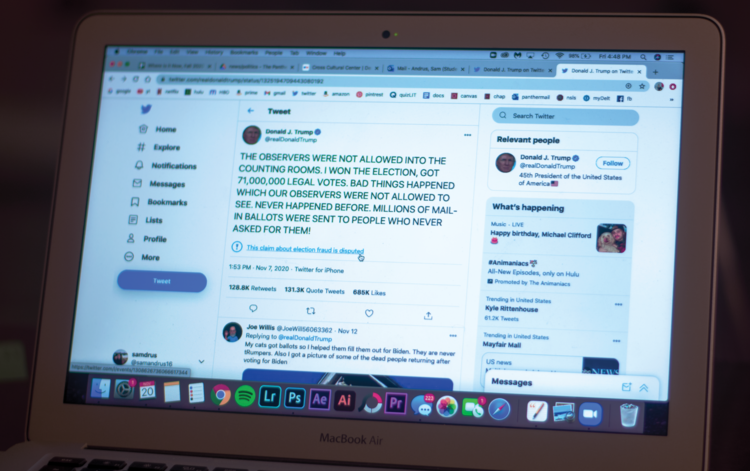 When I was eight years old, I was tasked with teaching my three-year-old brother how to play board games. For a few years, I played fair and square. But whenever I won, he would cry and throw a tantrum. He accused me of cheating, while I assured him that, no, I didn’t cheat.

Eventually, he grew out of it. But those few years were brutal: he would not accept defeat. It was me who “cheated,” because I had age and experience on my side.

It appears that a three-year-old toddler has more in common with the man currently sitting in the Oval Office than a functioning adult. I wish that I, too, could get a job I’m applying for simply by claiming the other applicants lied or cheated.

But this is the reality we are in, one where President Donald Trump warned that mail-in ballots were fraudulent and encouraged his voters to vote in-person. On Nov. 5, Trump tweeted “STOP THE COUNT!” when he, in one way or another, acknowledged he was trailing behind Biden.

Vermont Sen. Bernie Sanders even saw this coming. He predicted in October that Trump would prematurely claim victory. Now, Trump is acting like my brother did, crying out in all capital letters that he won the election and the votes are rigged. https://platform.twitter.com/embed/index.html?dnt=false&embedId=twitter-widget-0&frame=false&hideCard=false&hideThread=false&id=1325194709443080192&lang=en&origin=https%3A%2F%2Fwww.thepanthernewspaper.org%2Fopinions%2Fyou-cant-claim-voter-fraud-just-because-youre-losing&theme=light&widgetsVersion=ed20a2b%3A1601588405575&width=550px

In 2016, he claimed that millions of illegal voters caused him to lose the popular vote. He seems to have a fundamental problem with accepting defeat – he couldn’t even do it when his show, “The Apprentice,” failed to win an Emmy.

Since April, Trump has made over 150 claims of fraudulent ballots and mail-in voter fraud, according to The Washington Post. Most of these assertions were made at press conferences or over Twitter, where his tweets are often marked as misleading or incorrect by third-party fact checkers.

No, sir – you are the major fraud in our nation.

Trump’s claims of victory and Republicans backing his arguments are the reasons why we’re inching closer to a dictatorship where Trump refuses to leave office due to a “rigged” election. If Trump isn’t winning, the Electoral College that elected him in 2016 must suddenly be against him, right?

Cybersecurity director Christopher Krebs and his agency, who worked under Trump, said this election was “the most secure in American history.” Guess what? Trump fired him.

Trump’s adamant rejection of the 2020 election results are a testament to his entitlement. He feels deserving of a victory that will enable him another four years to serve his financial interests.

Not only are Trump’s allegations backed by Senate Majority Leader Mitch McConnell, but Republicans like South Carolina Sen. Lindsay Graham even suggested throwing out legally cast ballots to reverse Biden’s win in Georgia. This just shows what a criminal operation the Republican Party has become. The GOP only seems to care about its financial and lobbyist interests.

Trump’s allegations of mail-in voter fraud are a last-ditch attempt to undermine democracy. I can’t imagine taking anyone less seriously, especially when they consistently have no evidence supporting their claims.