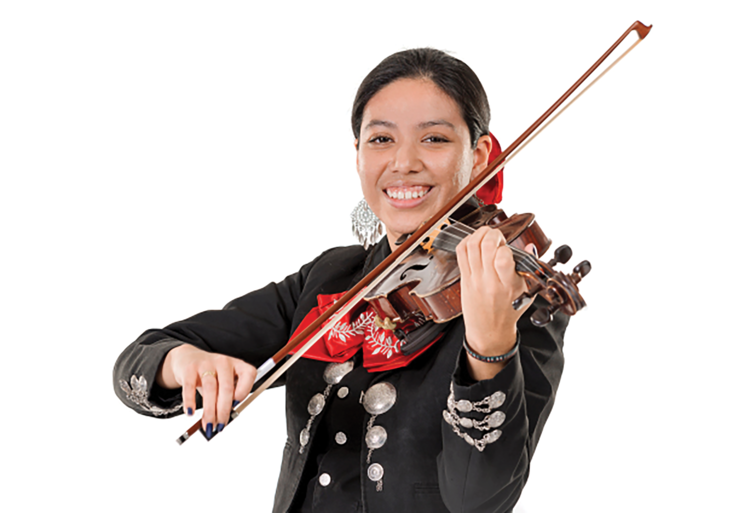 Yet, when she came to Chapman as a professor, she noticed there were no world music classes and no opportunity for students to teach music to the local community.

After her experience in a Mariachi band during her undergraduate years, Yi completed outreach work with several K-12 student Mariachi groups while she was teaching at the University of Arizona in Tucson, continuing the work with music teachers in Southern California at Santa Ana High School in their chamber orchestra during her time as a professor at Chapman. So Yi had an idea: to create the first college Mariachi ensemble in all of Orange County. She just needed students to help get the ball rolling.

“My grandpa on my mom’s side is completely obsessed with Mariachi,” Garrido-Figueroa said. “He has a huge record collection and a lot of it is Mariachi music. He would always put on a Mariachi Vargas record when it was one of our birthdays.”

Meanwhile, junior music education and saxophone performance double major Erandi Sanchez was born and raised in Anaheim, California, and has been performing Mariachi since she was just four years old.

So when Yi approached Garrido-Figueroa and Sanchez, two of her students, about the potential of starting a Mariachi ensemble, the two were instantly on board.

“There’s a common sentiment among students in (Chapman’s) conservatory that we need more diversity being performed,” Garrido-Figueroa said. “Mariachi is hopefully the first step towards a lot more of these kinds of ensembles starting.”

Yi, Sanchez and Garrido-Figueroa began the process to add the class in the spring, when they had to write a letter to the administration explaining the importance of a Mariachi ensemble course to the Conservatory, as a form of increased inclusivity both inside and outside campus.

“Mexican American students feel very underrepresented not just at Chapman but even in the Conservatory itself,” Sanchez said. “We thought it would add diversity and help better represent the community around Chapman; a lot of the high schools close by like Santa Ana (High School) have a big Hispanic population, but not a lot of those kids have a chance to go to Chapman because of the tuition. We thought that if we have a Mariachi ensemble, they can identify with the culture and that would pique their interest.”

Amy Graziano, the chair of the Hall-Musco Conservatory of Music, worked with Yi to expedite the process of adding the class. While Sanchez and Garrido-Figueroa wrote the proposal and designed the curriculum, Yi presented it to administration and obtained a grant for instruments for the students.

“The way Mariachi is learned and performed is very similar to the way Koreans like myself and many other countries make music,” Yi said. “I hope that this ensemble will be a pathway for the K-12 Mariachi students, especially those in surrounding communities to see a future at Chapman and continue playing.”

“Given the pandemic, we are learning Mariachi through Zoom,” Yi said. “Although the virtual platform is not ideal for a performing group, we adapted and found new opportunities.”

The Mariachi ensemble has met twice already, during which Sanchez presented on the history of Mariachi, influential groups and the cultural significance of the clothing. Ultimately, the group’s goal of community outreach and increased representation is well underway.

“Maybe we’ll be able to perform for that one student who is thinking of going to college, but isn’t sure if it’s for him or her,” Garrido-Figueroa said. “They see someone who looks like them in the Mariachi ensemble, and they think, ‘I can belong at a school like Chapman.’”