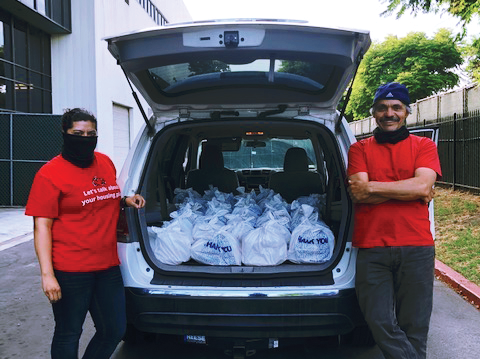 When Paige Goedderz, a senior sociology major at Chapman, crossed the Highway 57 bridge to check out potential housing options at Chapman Grand, she noticed large encampments of homeless individuals on the Santa Ana riverbed.

“When I ended up moving to Grand and living there, the encampments were all cleared out by then,” she said. “That brought me to realize and think about where they put the homeless.”

Goedderz decided to study homelessness in Orange County for her senior thesis. One of her biggest findings was the discrepancy between what homelessness liaison officers and community volunteers believed to be the cause of homelessness.

“The police officers tend to be more focused on individual culpability, saying things like, ‘They are breaking the law,’ or ‘They are using drugs,’ that insinuated that was the reason for their homelessness,” Goedderz said. “The community organizations usually emphasized public issues, like affordability of housing and other structural issues that have caused their homelessness.”

Currently, more than 40% of homeless Californians are at least 65 years old or carry underlying health conditions, according to the Los Angeles Times. During the pandemic, those risk factors have made them susceptible to becoming ill from COVID-19.

One organization aiding the homeless population in Orange County is Mercy House in Santa Ana. Lauren McGunigale, the associate director of Development, works with public funds to secure grants for the non-profit organization.

“We stand by the idea that we can end homelessness and that we can make it happen in our lifetime,” McGunigale said. “Mercy House provides a unique system of housing opportunities and emergency shelters – anywhere from 50 to 200 beds.’

Although people stay at the shelters on a more transitional basis, the emergence of the coronavirus has slowed the rate at which individuals enter and exit the shelters.

“With COVID, people are not exiting the shelters as rapidly as they normally do,” she said. “We want people to stay safe and we don’t want them to leave care if they don’t have to.”

However, Mercy House has been able to transition over 500 individuals into permanent housing since March, ending their cycle of homelessness.

“That tells the story of people having really generous hearts in the midst of this terrible pandemic,” McGunigale said. “We’ve been able to make an impact, even though the world is kind of crazy.”

Both McGunigale and Goedderz agreed that the lack of affordable housing is the root cause of homelessness in Orange County.

“Some people will say, ‘Oh, it’s because there’s so many addicts,’ but that’s like 5% of the homeless population, compared to 80% where it’s just an income disparity and a lack of affordable housing,” McGunigale said. “Even someone who has a (full-time job), there is such a disparity between their income and what it actually costs to live in Orange County.”

McGunigale said the pandemic adds additional barriers to end the cycle of homelessness, because if individuals lose their jobs they have to decide between buying food or paying rent.

“The homeless population during COVID is likely increasing quite a bit while the resources are becoming scarcer,” Goedderz said. “The people that are supposed to be volunteering and coming into contact with homeless individuals fear that they’re going to contract the virus.”

Goedderz has spoken with community workers at Mary’s Kitchen in Orange, California, and Mercy House also provides opportunities for students to organize hygiene and food drives.

“We always have volunteer opportunities and are always looking for financial donations,” McGunigale said. “It’s really about the passion you have behind it.”