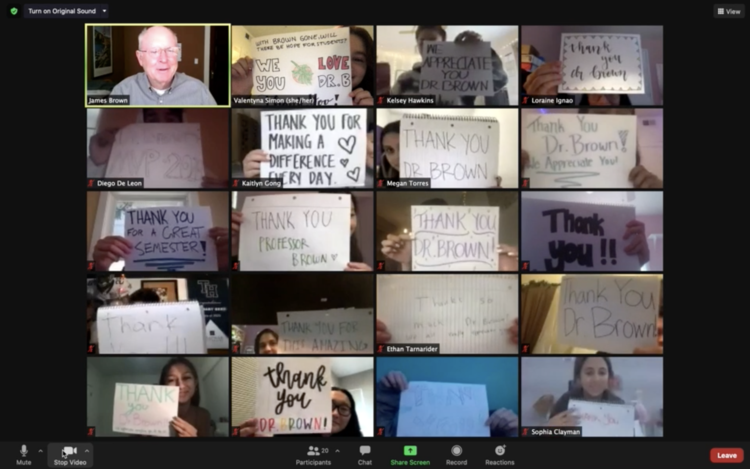 The vast majority of TikTok users have probably seen the video by now. A professor, at first a bit peeved because none of his virtual students seem to have their Zoom cameras turned on, is suddenly surprised when in unison they reveal themselves to be holding pieces of paper with “Thank you” messages. He begins tearing up, going for a tissue. It’s captured the hearts of so many viewers in an emotionally turbulent year that it’s garnered nearly 8 million likes.

Well, that professor, James Brown, teaches a First-Year Focus course at Chapman University titled, “Lies you Learned In School.” Lauren Herrle, a freshman business administration major in the class, said her classmates wanted to show appreciation for an instructor that had dedicated his semester to supporting students in a tumultuous time. Not captured in the video was one particular moment of the interaction that touched Herrle.

“I remember him saying, ‘Why couldn’t you wait to do this at the end of class? Now I’m just going to be emotional the whole time,’ which was really cute,” Herrle said. “He just told us all, ‘Thank you so much’ and how much he really appreciated it.”

This viral trend of teacher appreciation doesn’t stop there at Chapman. Chapman senior Colette Ngo saw another video a part of the TikTok phenomenon and excitedly sent it to her classmate. Ngo, a broadcast journalism and documentary and business administration double major, wanted to show appreciation for her professor Suzanne Lysak in her class, “The Art of the Interview.”

“We looked at every single person who has posted on the Canvas discussion board and I used the university email system to find everyone,” Ngo said. “I emailed everyone with the subject line ‘Surprise for Professor Lysak,’ saying we all can agree that she is the best.”

A professor in her second year of teaching at the Dodge College of Film and Media Arts, Lysak said students’ preference of an in-person format didn’t hold them back from doing great work remotely.

“It really helps me to be motivated when they take such an interest and they respond, so that worked really well,” Lysak said. “I taught three classes this semester and in Dodge College, they tend to have some very creative students but they went above and beyond … It’s pretty impressive what they were able to do.”

Luckily for Ngo, all the students in Lysak’s class responded to her email with excitement about the surprise. Ngo made sure to follow up with everyone in order to solidify the plan before the class began.

“Professor Lysak is not the type of person to get surprised easily. To see her shocked was really awesome,” Ngo said. “She took a photo before she said she was going to miss us.”

Lysak agreed that her students caught her off guard, even though she was impressed that they were able to pull it off.

In the midst of a semester that’s thrown students into crisis mode, they showed great appreciation for the ability of professors like Brown and Lysak to help stabilize the difficulties of remote learning.

“Professor Lysak made herself available to all of us beyond office hours and she totally deserved to be appreciated like this,” Ngo said. “I’ve never met her in person, but she’s guided me throughout my quarter-life crises this semester and truly cares about each of us.”